Yep. And tornadoes, too. Tornado-propelled sharks. Check out this video showing a shark cage test with SOLIDWORKS Simulation. SOLIDWORKS is really pumping up its Simulation module, and this video is pretty fun; I couldn’t help but share it. I’m a big fan of better testing at the design level. Designs today are generally so large (or, if they’re not large, they are very intricate) and require so much functionality in extreme global environments that incorporating more accurate and flexible testing during the design process–instead of afterwards–is singlehandedly responsible for saving a ton of money in redesign costs. It’s a lot easier to make changes during design than on the factory floor, capisce?

So in this video, the SOLIDWORKS designer extraordinaire Jacques watched a bunch of shark documentaries and designs a submersible shark cage in SOLIDWORKS, and tests it with the built-in FEA stress testing module in SOLIDWORKS, which is called Simulation. Jacques tests his SOLIDWORKS cage against the violent pressure of a shark collision, the power of a shark’s chopping, slashing jaws, and the ultimate test (hee hee): will the cage withstand the impact from a tornado-propelled shark? You don’t have to hear a SOLIDWORKS Simulation sales pitch to watch the video; so give it a view! 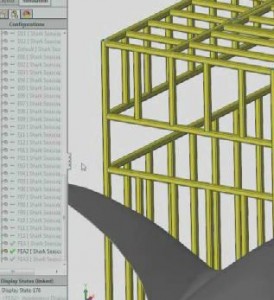