AutoDesk has been beefing up its simulation portfolio for a few years. First it brought Algor, Moldflow and CFDesign to the fold. Last May, AutoDesk generated major CAD buzz when it purchased the standalone Nastran Solver and the SOLIDWORKS Nastran-in-CAD module from NEi Nastran.

The Nastran Solver is a flagship tool for finite element analysis (FEA) in structural mechanics. What’s exciting is that the same solver also powers the less expensive in-CAD add-in. AutoDesk got busy and in August 2014 released a version of Nastran-in-CAD compatible with Inventor (basic and Professional, not LT or Fusion 360).

At this point AutoDesk dominates the FEA chessboard. NASTRAN code has been at the center of the simulation market for decades. Its pedigree and legacy are impeccable. Its precision and fidelity are unchallenged. Based on NASA’s 1968 Structural Analysis program, NASTRAN, the tool spread from aerospace and military applications to other large industries that could make an investment in mainframe hardware and specialized staff. The 1990s microprocessor revolution filtered this massive analytic power down to smaller fish in the sea when Noran Engineering (NEi’s predecessor) deployed the original code to PC.

What this all means is important: Nastran-in-CAD hails the age of simulation-driven design. You get the world’s premium FEA solver embedded right inside the SOLIDWORKS or Inventor interface. Yep, Inventor Professional and SOLIDWORKS Premium do offer some static linear testing functionality. But Nastran-in-CAD marks a huge leap forward in simulation complexity. It also tests for non-linear stress, fatigue, deformation, and heat transfer characteristics of structures and mechanical components, with a couple dozen complex tests. 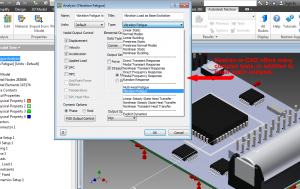 Nastran in CAD – offers a variety of complex test types

The big question: how much? Nastran-in-CAD is delivered via a floating license, with the initial purchase ranging from about $9,000 – $12,000 US dollars. The annual subscription is about $2,000. It’s not standalone software. It’s an add-in that you enable in SOLIDWORKS or Inventor. So you need to buy one of those CAD modelers, too. Ouch.

And now you’re thinking, “Wow. That’s a lot of money. Do we really need to spring for this?” This really depends on how the cost of failure hits your bottom line. The return on investment for simulation-driven design is substantial. Why? Many different reasons; check out the next part of this article for more info.