Inventor, as you may know, was developed by AutoDesk–they develop a whole lot of software, like the famous AutoCAD, Maya and 3D Max. Inventor is the AutoDesk product for 3D CAD parametric modeling, and was first released in 1999. It is a direct competitor of SolidWorks, and is gaining market share. It used to be quite a bit less expensive, but now it’s about the same price for a basic license (although still a heck of a lot cheaper than a CATIA seat). However, it’s a little easier to get student software for Inventor; you can get it on Amazon and through the Academic Superstore, etc. You need valid student ID and proof of enrollment in a related course. We also offer student discounts of 15% for our Inventor tutorials.

What’s a parametric modeler? This you may have heard me talk about before. Parametric modelers constrain and track the relationships between your geometric entities, thus letting you modify the model without having to start from scratch. Any single parameter can be modified later on during the design process and automatically and easily update. So, this is a mechanical design tool rather than an electronic drafting board like AutoCAD. Since computers are faster and faster, 3D modelers have become more affordable then they used to be, since you can set one up on essentially an entry level PC with a hefty load of RAM.

Then there’s some of the terminology used during modeling (which is pretty useful in any Inventor tutorials!) What’s a model, exactly? It’s a group of features added one at a time, until the model is complete. An assembly model pulls together individual part models and demonstrates how they connect and work together. So, what’s a part? A part is made up of one or more features. A feature is the elemental building block in 3D modeling: your first 3D output from a 2D sketch. For example, a cylinder is a single 3D extrusion of a circle. This is a feature and it can also be a part.  You can cut a hole in the cylinder. So then you have two features–the cylinder and the cut or hole; these two features still make up a single part. An assembly consists of multiple parts and even multiple models. What’s great about 3D modeling software is that you can easily generate drawings from parts or assemblies in a variety of views; your sketch is not your final draft output.

If you’re used to AutoCAD, Inventor is going to seem hard or at the least unintuitive to use. That’s where Inventor tutorials become pretty useful…. While AutoCAD is an electronic drafting station, with Inventor, you focus on creating a model of your design. You start with a sketch, or many simple sketches to create a simple model. Generally it is better to create several simple sketches rather than one very complex sketch of your entire model, as you would in AutoCAD.

Then you move to the part environment, where you create features from your sketches.  After this, you move to the assembly environment to put your parts together and show how they are going to work at the end of your project. You can also start this process right from the assembly environment, in what’s called a top-down assembly; this lets you see all your parts in play as you begin your sketching. Which method you choose, either bottom-up, or top-down, depends on the complexity and size of your final product.

In AutoCAD, many commands are pretty specific, most easily accessed via the command prompt, and often and require familiarity with the software to access quickly and use well. In Inventor, the command structure is more compartmentalized. It’s basically a bit more simple. You switch environments based on which stage of your project you’re working on–whether it’s the sketch, the parts, the assembly, the drawing, the simulation, etc. Each environment provides the appropriate tools on the ribbon command manager. (Our Inventor tutorials cover the interface in great detail).

For example, in the Inventor sketch environment, you are usually creating and editing two-dimensional geometry, so you see a lot of tools appropriate to this purpose, like lines, rectangles, circles, arcs, polygons, splines, as well as the tools you need to tweak that geometry once you’ve drawn it in the graphic area–like offset, trim, extend, copy, move, replace etc.

You can’t edit your part until you exit your sketch, either saving or discarding your changes. All parts are based on a sketch, so if you made a change to your sketch, then as soon as you save the change and exit the sketch, you’re taken back to the part modeling environment, and your changes will be reflected there immediately.

Even if you are in the part modeling environment, the moment you open a sketch, you are taken to the sketch environment, where you can make changes to your 2D or 3D geometry, and your part will update accordingly.

This concludes my first entry for this series on Inventor tutorials for beginners; stay posted for more info! Thanks, Rosanna D – VTN – www.video-tutorials.net.  To see some Inventor tutorials, please visit our YouTube channel, videotutorials2. (https://www.youtube.com/playlist?list=PLx-VY2mDlK2Ex6kcC-O4uPVRX_EU5AFV_) 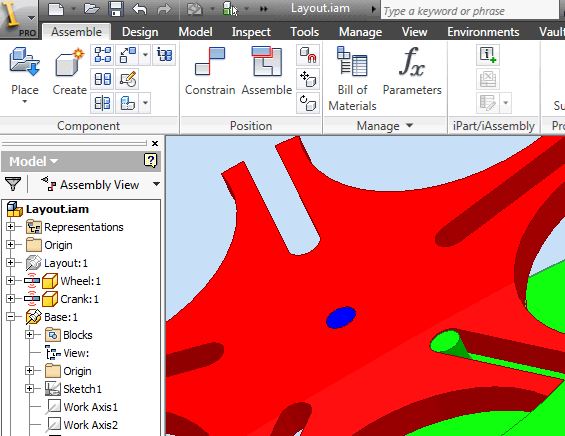