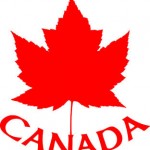 July 1 is here, the beginning of summer, so Happy Canada Day from Video-Tutorials.Net! Our funky large but sparsely populated nation is now 148 years old. My mother happened to immigrate from Italy on Canada’s 100th birthday, on July 1, 1967. She had no idea there was anything special about the date of her arrival, and she was really nauseous from fear of flying and terror at (only 17 years old) being so far from her family, for the very first time. I come from a party of Italy where people, back then, didn’t even ever get more than 15-20 km from their village (by foot; nobody had a car until the early 80s) ever, in their whole lifetimes, so making this voyage was a huge shock and shift for my mamma.

Anyway, to celebrate the event, I’m hosting another giant sale on video tutorials; enter CANADA at checkout (lower case or upper case should be ok) to save 15% on all courses. Stay tuned for what’s new in SOLIDWORKS 2016, also.

Happy Canada Day – some historical facts for our customers, most of whom aren’t Canadian!

June 20, 1868: Governor General Lord Monck signs a proclamation that requests all Her Majesty’s subjects across Canada to celebrate July 1.

1879: A federal law makes July 1 a statutory holiday as the “anniversary of Confederation,” which is later called “Dominion Day.”

July 1, 1917: The 50th anniversary of Confederation. The Parliament buildings, under construction, are dedicated to the Fathers of Confederation and to the courage of Canadians who fought in Europe during the First World War.

July 1, 1927: The 60th anniversary of Confederation. The Peace Tower Carillon is inaugurated. The Governor General at the time, Viscount Willingdon, lays the cornerstone of the Confederation Building on Wellington Street.

From 1958 to 1968: The government organizes celebrations for Canada’s national holiday every year. The Secretary of State of Canada is responsible for coordinating these activities. A typical format includes a flag ceremony in the afternoon on the lawns of Parliament Hill and a sunset ceremony in the evenings, followed by a concert of military music and fireworks.